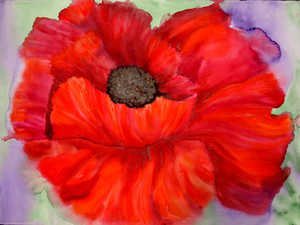 Always fascinated with color and already a budding talent as a child, Virginia was given private lessons where she became skilled in the mediums of watercolors, pastels and oils. The masters of Impressionism, most notably Van Gogh and Gaugin inspired the young girl. In college, her love of art extended into the language arts. At Sacramento State, she majored in French with minors in German and Spanish. As part of her college curriculum to hone her language skills, Virginia traveled extensively in Europe touring museums, artists’ homes and studying Gothic architecture; she settled for a time in Geneva, Switzerland where she modeled in all the art schools of the city.

After graduating with a degree in Language from Sacramento State in 1967 she traveled again, this time to San Miguel de Allende, Mexico, which became her home for almost 30 years. Working again as an artist’s model and still enthralled with color and its various applications, Virginia was captivated by an exhibition of brilliantly colored wool skeins at the National Art School of Mexico. It had such an impact on her she began to weave using wool she had spun and dyed herself. For the next 23 years she designed rugs, tapestries and clothing, which sold in local shops as well as Dallas and New York. In addition, her work was exhibited in major cultural centers throughout Mexico.

Since returning to the United States, Virginia has become a much sought-after painter, muralist and faux finisher. One of her large colorful murals is on display at the Union Bank Building of California at University and 30th in the city of San Diego. Her talent and skill have garnered her numerous awards both here and in Mexico. In 2003 she was the featured artist at the Sony “Art Walk” in the Little Italy district of downtown San Diego. Virginia currently makes her home in Del Mar, California. “In the Pink, Epiphyllums”
Acrylic on paper. Greeting cards and prints available.